The tiny `alien’, humanoid of a creature found in Chile’s Atacama Desert which looks like a shrunken version of a monster has been confirmed as a human after extensive testing by the Stanford University scientists. It is close to human than chimpanzees and is believed to have lived to the age of six to eight according to Garry Nolan, director of stem cell biology at Sanford University’s School of Medicine in California as per the Daily Mail. 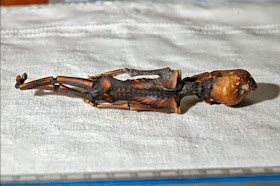 It could have been breathing, eating or metabolizing and the question is how big it would have been when it was born. This six inch skeleton, which has been nicknamed `Ata’, and found in Atacama Desert in 2003, has been a source of great speculation since then and while some have claimed that the odd skeleton could be that of a primate or aborted foetus, conspiracy theorists focus on to its elongated skull as evidence that it is an alien which could have crash landed on the planet.

Researchers though have conducted DNA test which indicated that the skeleton had earthly origin and testers believe that the tiny creature could have be around six to eight years old before its demise as reported by Discovery News. 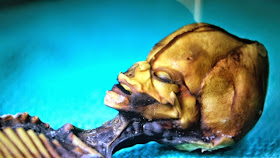 This was discovered over ten years ago by a local in the Atacama Desert, who had been looking for objects of historical value in the Chilean ghost town of La Noria. The six inch long Atacama Humanoid, has hard teeth, dark, scaly skin with bulging head that had a lump on the top and nine ribs.

Its huge head and rib count has been associated with extra-terrestrial beings leading many to hypothesize that this alien had more in relation to E.T. than humans. Nolan states that it is an interesting medical mystery of an unfortunate human with series of birth defects where currently the genetics of which are not very clear. 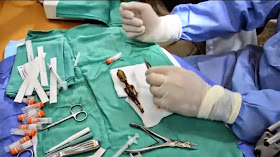 There seems to be a lot of discrepancy regarding the Atacama alien. According to Paola Viscardi, a natural history curator at the Horiman Museum in London, it seems impossible that this skeleton could have come from a child between the age of six and eight.

He had found it amazing since he had dealt with skeleton foetus specimens which were similar to this in museum collection, as mentioned in his blog, Zygoma. He further states that the Ata specimen could probably be an aborted foetus of 14 to 16 weeks which could have been ceremoniously neglected in the desert where it went through a natural mummification process. 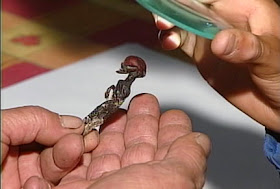 According to him, the difference he had concluded on discerning the high quality photos, x-ray and CT scan was that the Atacama specimen came from a slightly earlier stage foetus, mummified soft tissue which had shrunk tight pulling the rib cage into a more narrow configuration while the head had been distorted as a result of an illegal abortion where a hook could have been used to extract the foetus thereby causing damage to the back of the skull and stretching the pliable head.