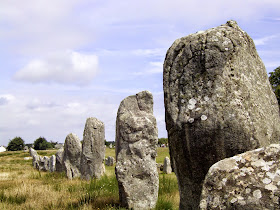 Carnac, a small village of around 5,000 people is in the region of Brittany, north-western France and is a home to the Carnac Stones, a system of over 3,000 prehistoric standing stones. Carnac is known for its unique rows of ancient standing stones all over the world with many tourists coming to this destination to take a look at this amazing structure.

The Carnac stones are exceptional, the largest collection of megalithic standing stones in the world occurring in a number of Neolithic sites around the French village of Carnac in Brittany, which include rows of stones consisting of alignments, multi-stone clusters - dolmens, tumuli and single standing stones - menhirs. The stones were erected somewhere during the Neolithic period around 3300 BC though some could be as old as 4500 BC.

Over 3,000 prehistoric standing stones were cut from local rock and were erected by the pre-Celtic people of Brittany which seems to be the largest collection in the world. A majority of the stones are within the Breton village of Carnac though some to the east are within La Trinite-sur-Mer. 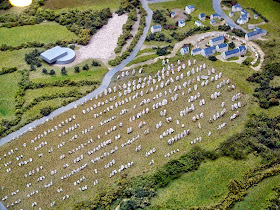 In recent centuries most of this site wore prone to negligence with reports that the dolmens were being used as sheep shelters, chicken sheds or even used as ovens while the stones have been moved to make way for roads or could have been used for building purposes.Although the Carnac stones dates back from 4500 BC, modern myths developed resulting from 1st century AD Roman with Christian occupations later, like Saint Cornelius, a Christian myth which were associated with the stones held that they were pagan soldiers in search of Pope Cornelius when he had turned them to stone.

Local tradition claims that they stand in such perfect straight line is because they are a Roman legion who have been turned to stone by Merlin. There are three types of groups of stone rows namely Menec, Kermario and Kerlescan which could have formed a single group once but may have split up, as stones were moved for other purposes.

Erected by the Megaliths 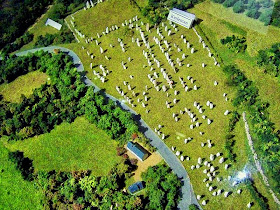 Though the Carnac stones were cut from local rock and erected by the megaliths, the precise date of the stones is difficult to ascertain since little records and material has been found beneath them, though one interpretation of the site is that successive generation could have visited the site in order to erect the stones in honour of their ancestors.

The Menec alignment are twelve converging rows of standing stones stretching over a kilometre and the remains of a stone circle at either end. The largest stones which are around 4m thick are at the wider western end which gets smaller along the length of the alignment arriving at around 0.6m high at the extreme east and growing in height.

Towards the east further on, the fanning layout is repeated in what is known as the Kermario alignment. The standing stone of Carnac are one of the greatest attractions of Brittany. The granite stones which were erected on the spot were from where they were dug and hence the difference in their sizes, though it is unknown why they were put up there. Some presume that they could have been erected due to religious or cultural significance.
Rajkumar R
Share