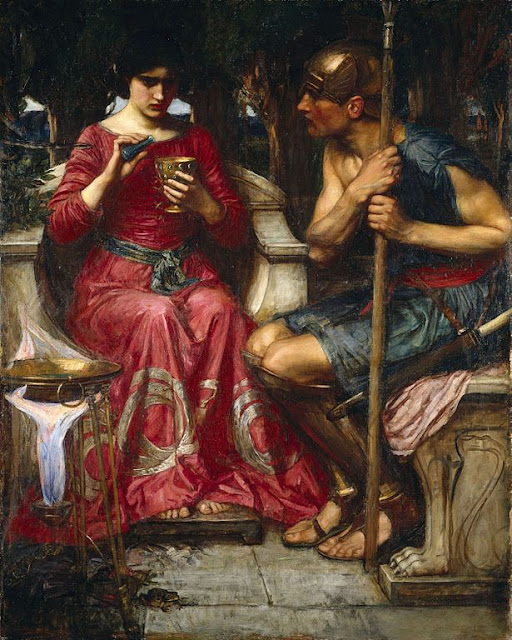 Jason, an unconventional hero, was the leader of the Argonautic Expedition. As he was the son of Aeson and Alcimede, he should get his father's position on the throne of Iolcus. But his half-uncle Pelias usurped the position. His uncle feared for his life if Jason could attack him for the ancient prophecy. So, Pelias planned to keep him away from Iolcusas far as possible. So, Pelias ordered him to fetch the Golden Fleece from the King Aeetes of Colchis, one of the impossible things to do during that period.

He had a ship, Argo, where he assembled some great heroes of his time. Argonauts, a team of the greatest heroes, retrieved the Golden Fleece after an exhausting expedition beset by giants & monsters and brought that back to Iolcus.

Aeson's son got immense help from a goddess (Hera), the members of his crew, and King Aeetes' daughter, Medea. She left everything behind to be with him. However, after some years, he deserted her for Corinth's princess, Creusa. But she could not tolerate the betrayal and murdered both Creusa and her two sons by Aeson's son.

Although his parents sent him to the Centaur Chiron, Jason returned to claim the throne. But he was ordered to fetch the Fleece and took it away with the help of the enchantress Medea. After their return, she murdered Pelias. But Pelias' son drove them out. As a result, they had to take refuge with King Creon of Corinth. However, later, he deserted Medea for Creon's daughter. His desertion and the results are popular as Euripides' Medea.

He was an ancient Greek mythological hero. Besides, he was the leader of the Argonauts. In addition, he was the son of Aeson, the original king of Iolcos. Moreover, he was the great-grandson of the messenger god Hermes on his maternal side.

The Argonauts and the Quest for the Golden Fleece:

He assembled the greatest heroes of that time. They are famous as the Argonauts after their ship, the Argo. These are the names of the heroes, including:-

He was born in the mid-term while a war was running inside his family for the throne of Iolcus. Later, he returned to Lolcos after being raised by the Centaur Chiron to claim his position on the throne. But Pelias sent him away to fetch Golden Fleece, an impossible task.

Pelias Usurping the Throne of Iolcus:

Although Jason was Aeson's son, king of Iolcus, it was uncertain who his mother was. But it might be Alcimede, the daughter of Clymene, or Polymede, one of Autolycus' daughters.

Pelias killed all the kids of Aeson but failed to kill Jason. Therefore when he was a baby, his parents sent him to the Centaur Chiron, who nurtured him into adulthood.

Once, Pelias held some games in honor of the god Poseidon. The son of Aeson attended these games. But while helping a disguised Hera to cross, he lost one of his sandals in the river Anaurus. In this regard, you should know that Hera was a goddess who hated Pelias because he neglected to honor her. So, she blessed the son of Aeson at that moment. She turned him into an instrument to bring Pelias' demise soon. As soon as he appeared in front of Pelias to introduce himself, the original heir of Aeson, Pelias recognized the danger. Pelias asked him about his contribution to the emperor. So, Pelias told him that if he could fetch the Golden Fleece to Iolcus, he would step down from the throne to allow him to hand over the position.

He gladly accepted the task of bringing the Golden Fleece from Colchis to Iolcus. So, he began his journey with the Argonauts after his ship, Argo. He, with his heroes, met with multiple adventures and perils.

They reached Colchis. After that, the king of Aeetes welcomed them. He saw the Golden Fleece in possession of the king. Phrixus gifted the golden Fleece to the king while arriving there on a flying golden ram years before. Then, the king said he would give it to him if he completed some tasks in a single day.

Fortunately, there was Hera, his guardian-goddess, to help him in every step of his journey. During that time, Medea, Aeetes' daughter, fell in love with him because of Hera. Along with being a princess, she was a high priestess of Hecate.

What was Jason first task?

His first task was to plow a field from end to end with the help of two angry bulls. Jason promised Medea that he would marry her once the expedition was over. She gave him an ointment to keep him secured from the fire. As a result, he became practically invulnerable. After that, he flew the field and yoked the bulls using the balm.

What was Jason second task?

The second job was to sow the dragon's teeth in the plowed field. It might appear a simple task to do. But once it got completed, an army of stone warriors would spring out from the earth. However, Medea knew the solution and prepared him according to it. He followed her advice and flung a rock amid those warriors. The warriors didn't know who had thrown it. So, they turned on each other and began fighting. By the Sunset, he remained the one who was still alive on the field.

But still, the king did not want to hand over the Golden Fleece. Instead, he planned to kill Aeson's son and the Argonauts with the leading men of Colchis during the night. However, Medea realized it and fled from her father. Then, she joined the Argonauts to direct them to the Golden Fleece. It was hung from a sacred oak tree, and a sleepless dragon was on guard. Then she used her spells and drugs to make the dragon fall asleep. Finally, the time was sufficient for him to snatch the Fleece and carry it back to his ship.

She helped him to extinguish Talos, the giant bronze man. Besides, she killed her brother also. In simple words, she was fully committed to him. But still, he betrayed Medea and married another woman. However, her revenge was both tragic and gruesome.

Conclusion— The Death of Jason:

According to a few people, he killed himself. But others told another story regarding his death. In the latter period, Hera stopped doing any favor to him after when he broke his vows to Medea. It seemed like he was only a captain that he had been once. While sleeping under the stern of his ship, a rotten beam fell on him, causing his death.