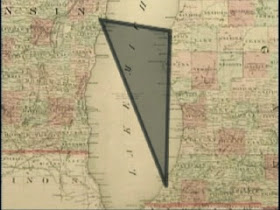 The Michigan Triangle is another geographical triangle besides the Bermuda Triangle which is located in the middle of Lake Michigan and is also a site of various mysterious disappearances of land as well as sea craft which include strange disappearances, ghost ships and even UFO sightings.

The Michigan Triangle has transpired several accounts of activity which are difficult to comprehend by rational thinking. Its first mystery started in 1891, when a schooner, Thomas Hume set off to pick up lumber across the lake and overnight Thomas Hume along with his crew of seven sailors, disappeared without any trace. The wooden boat in which they travelled was never located inspite of extensive search which failed to recover even the slightest details about them. 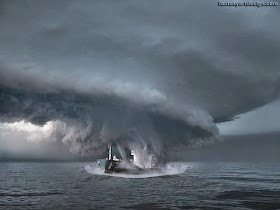 Strange incidents occurred at steady intervals after the turn of the century and another of the mysterious incident was the case of the Rosa Belle. In the year 1921, eleven people in the ship, the members of the Benton Harbour House of David also disappeared and their ship was found floating in the Lake Michigan which was overturned.

Though it seemed to be damaged in collusion, there were no reports of any other ship engaged in accident or any remains which could have been found. Several people found this mysterious because the Rosa Belle had been rebuilt after the wreck of the 1921 incident.

Legends with regards to these incidents mounted with reports about the triangle claiming that a number of weird occurrences took place during the passage through this area. Some claimed that this triangle seemed to be a time portal which either slowed or quicken the time immensely during the passage while others considered that the UFO’s were spotted in the area or reported bright lights in the sky.


Chilling accounts supported the legend over a period of time and soon many were relating about strange weather phenomena or feeling of uneasiness while navigating in the swath of the lake. Though several experiences taken place varied, the legend has grown to be one of the powerful entities to keep many away from this triangle.

A historian, Bill Wangemann from Sheboygan, Wisconsin had spent several years gathering tales about the Lake Michigan triangle. Another author Linda S. Godfrey has mentioned in her book, Weird Michigan, thatthe Triangle begins from the town of Ludington to Benton Harbour in Michigan, while another links from Benton Harbour to Manitowoc, Wisconsin and the final side connects Manitowoc back to Ludington.


The legend does not end with ships that have been sunk but there are also incidents of disappearance of around forty planes over Lake Michigan, the most famous being the northwest airline flight 2501 which took off from New York City heading for Minneapolis in June 1950 which plunged in Lake Michigan just off Benton Harbour with no survivors.

Inspite of it all, there are many who have made their journey through the Triangle like Captain Kevin Fitch of the Badger Ferry who has been sailing the Lake Michigan water for about thirty years. According to him, the thousand trips conducted by him across the lake, has not given him any incidents of anything strange which is not fitted with an explanation and he continues to ferry across the waters of Lake Michigan which is considered to be very dangerous by many.
Rajkumar R
Share