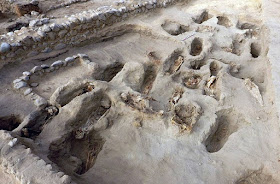 Archaeologists have located skeletal remains of around 227 children along the coastal desert area, north of Lima, Peru. They had excavated the site utilised by the pre-Columbian Chimu culture which is said to be one of the massive discovery of child slaughter. According to Adina reports, the remains of the children date back between 13th to the 15th centuries.This sacrificial site had been located near Huanchaco, which is a tourist beach side spot north of Lima.

This location was considered to be one of the ports preferred by the pre-Colombian Chimu culture, a society which existed around the year 900. It was located towards the northern coast of Peru till they were defeated by the Inca in the 15th century. It is believed that these children had been slain and buried there, some hundreds of years ago.

It could have been a huge ritual sacrifice administered on these children. As per investigators excavating the site, this seemed to be one of the biggest burials ground of children. Chief archaeologist Feren Castillo informed news site AFP, `wherever you dig, there was another one’.


Killed as Offerings to God

Castillo is of the belief that the site was significant of adjoining burial grounds wherein huge groups of children had marched to the coast and had eventually been stabbed in the chest one by one. It was found that their chest had been cut open and in some instances, their hearts were missing. They had all been buried in a mass grave.

Experts presumed it to be a likely systematic killing ritual on observing a horizontal cut across the breastbone which according to them could be inflicted on the children to remove the heart The archaeologist believed that the children at Huanchaco could be in the age group of 4 and 14 years and some of the bodies had traces of skin and hair when their remains were discovered.

Taking into consideration, the location of the site and the indication of the bodies buried during wet weather, Castillo was of the opinion that the children could have been killed as offerings to the gods, controlling the El Nino phenomenon. This was a biannual climate cycle which would end in catastrophic storms with hurricanes in South America.

El Nino was a weather pattern wherein the areas of the Pacific seemed to get warmer occasionally. According to the National Oceanic and Atmospheric Administration mentioned on its website, `the warmer tropical Pacific waters cause changes to the global atmospheric circulation, causing a wide range of changes to global weather.

When the Pacific Ocean would get warm significantly, due to the weather occurrence, it would have an overwhelming effect in the region. The children could have been slaughtered and sacrificed to appease the El Nino event during wet climate. This ghastly site is in the proximity of the UNESCO world heritage site of Chan Chan.

Experts in Chile mentioned in a separate project have revealed new insights on how the Inca civilization utilised `trophy heads’ in maintaining power over captured people. At its pinnacle, in the 16th century, the Inca Empire covered present day Peru together with areas of Bolivia, Ecuador and Chile. More sites have been discovered lately. Huge collection of skulls buried under the streets of present day Mexico City, provide glimpses of a horrific Aztec human sacrifice of the Chimu culture.

This type of weather motivated sacrifice could have taken place at the proximate Chimu site of burial of Huanchaquito. The Chimu culture was very prominent between the years 1200 and 1400, towards the Peruvian coast. This area had been frequently utilised for child sacrifice as spiritual ceremonial. Being one of the most powerful civilisation in Peru, the Chimu civilisation together with its territory expanded towards the coastline of the country till it had been captured in 1475, by the Inca Empire.

Remains of around 140 children were found in 2018. Researchers discovered remains of around 200 massacre llamas in the adjoining areas and it was considered to be the biggest child burial ground in the world. Other areas in Peru have also revealed more secrets. The remains of over 140 children and 200 llamas or alpacas were discovered in April 2018, at a 15th century sacrificial site near Huanchaquito-Las Llamas. According to radiocarbon it reveals that the remains could be from the era of 1450 A.D.

According to report, the findings of many Mayan artifacts discovered towards the bottom of Guatemalan lake could have been utilised in ritual animal sacrifice during that era. The excavation had been carried out at Huanchaquito around 2011.

However, the discoveries had been published by National Geographic, last year and this was helpful financially in the investigation of the case. Researchers also came across some footprints which survived the rain and erosion. These footprints resembled those of the children which lead them to their death.
Rajkumar R No comments:
Share
‹
›
Home
View web version