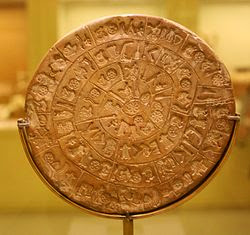 The Phaistos disc or disk was discovered in 1908 in southern Crete by an Italian archaeologist, Luigi Pernier and is a fired clay disk from the Minoan palace of Phaistos probably dating to the middle or the late Minoan Bronze Age.

He discovered the disc while excavating the first Minoan palace which was found in the main cell of an underground temple depository where the basement cells were accessible from above and covered neatly with layer of fine plaster.

Though the context was poor in precious artifacts, it was rich in black earth and ashes mixed with burnt bovine bones. Liner A tablet PH-1 was found in the northern part of the main cell, few inches south east of the disk and about 20 inches above the floor. The site probably collapsed due to earthquake linked with the explosive eruption of the Santorini volcano affecting large parts of the Mediterranean region.

The disc is a two sided circular tablet around 15 cm in diameter which is covered on both sides with spiral of stamped symbols. These symbols were impressed with the use of stamps instead of being hand engraved which indicates that they had facility for large scale production of printed material though no other samples of the script has been discovered.

The disc has a total of 242 symbols broken into 61 groups where most of the symbols are pictures of recognizable objects though its purpose and meaning together with its original geographical place of manufacture seems to be unknown thus making it one of the famous mysteries of archaeology.

This amazing disc is now on display at the archaeological museum of Heraklion. It is presumed that the pictograms could have been used phonetically probably in a manner which was similar to Egyptian hieroglyphics. Some others consider the disc to be an artefact having religious ceremonial functions and does not represent sample of a developed writing system. 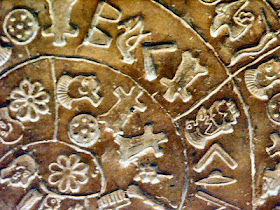 The Phaistos Disc drew the imagination of amateur as well as professional archaeologist with several attempts made to decipher the code on the disc. There are 242 tokens on the disc comprising of 45 signs most of which represent everyday objects.

Besides this, it has a small diagonal line beneath the final sign in a total group of 18 times and the disc indicates traces of correction which could have been made by the scribe in some places. Arthur Evans has numbered the 45 symbols from 1 to 45 which has become the conventional reference that has been used by several researchers.

Some of these symbols have been compared with Linear A characters by Nahm, Timm and others, while still others have pointed to similar resemblance with the Anatolian hieroglyphs or with Egyptian hieroglyphs.

Text Written from Exterior to the Centre

From the diverse epigraphical facts such as overcuts, corrections, angulous points of the spirals, etc. it is observed that the text is written from the exterior to the centre and the fact that some corrections were done on the spot, indicates that the scribe could have been composing the text in proportion while printing it.

Hence there is no way to dissociate the direction of printing from the direction of reading. While some symbols were pictographs and represented objects depicted, others functioned as ideogram wherein the pictures relates and expresses an idea such as a boat would relate to travel. Pictographs and ideograms are much easier to understand than the syllabic or phonetic systems of writing which may evolve as a means of expressing abstract ideas in any given language.
Rajkumar R
Share