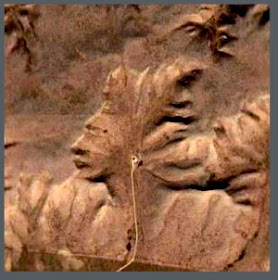 The Badlands Guardian which is also known as Indian Head is considered to be a geomorphological feature which is situated near Medicine Hat, south east of Alberta, Canada. It is a magnificent rock formation which was viewed from the air that resembles a human head with full Native American headdress facing westward.

Badlands Guardian was discovered by Lynn Hickox on November 2006 while accidently surfing Google Earth on the internet. Mrs Hickox who lived in a small Canadian town had brought about this awareness by posting her discovery on Google Earth forum using the nickname `Supergranny’, stating that she was navigating for direction to a dinosaur museum when she suddenly came across this discovery of the Badlands Guardian.

Due to man-made structures, Badlands Guardian seems to be wearing earphone where these earphones seem to be road and an oil well which were recently installed and are expected to vanish once the project tends to get abandoned. It is said that its scale is quite larger than that of Mount Rushmore. The image can be traced on 50° 0’38.20”N 110° 6’48.32”W with the use of Google Earth. 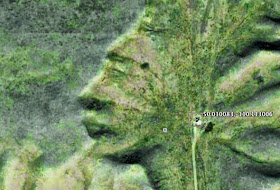 Several names were canvassed by CBC Radio One program, As it Happens and out of fifty names which were submitted, seven were recommended to the Cypress County Council. The suggested name `Guardian of the Badlands was altered and came to be known as `Badlands Guardian’.The rock formation measures 255 metres wide and 225 metres long on land which has been leased by local ranchers.

The head seems to be a drainage feature which was created through the process of erosion of soft clay rich soil due to wind and water. Its arid badlands have been formed by infrequent though intense rain, sparse vegetation together with soft sediments while the head could have been formed during the short time of fast erosion after the intense rainfall.

The Badlands Guardian images seems to be a convex feature but is actually concave which is a valley formed by erosion on a stratum of clay. This is instance of the Hollow Face illusion and its age could probably be considered at a minimum of hundreds of years.

Badlands Guardian was also described as a `net sensation’, by the Sydney Morning Herald while the PCWorld magazine referred the formation as a geological marvel. Moreover it was covered by Canada’s Global Television and is also listed as the seventh of the top ten Google Earth discoveries by Time Magazine. Its formation is amazing taking into consideration that human hand had no part in its shaping and creation of this large mass of rock. Its profile has been formed due to erosion of rainwater on clay rich soil layers.
Rajkumar R
Share