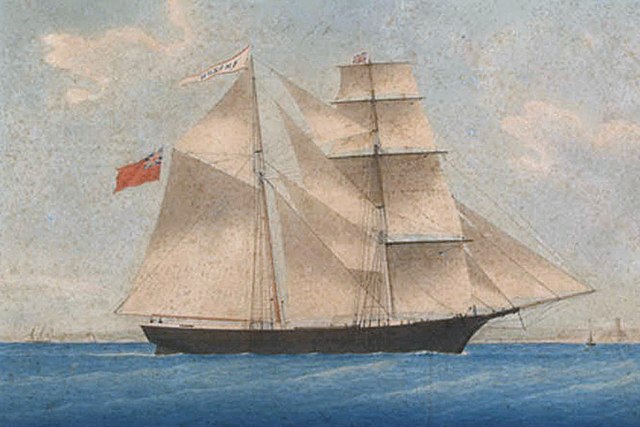 Mary Celeste is denoted as Marie Celeste. It was an American merchant brigantine founded adrift in the Atlantic Ocean off the Azores Islands on December 4, 1872. On the very next day, the British brig Dei Gratia saw a ship while sailing through rough weather. During that time, the ship was drifting through the Atlantic near the Azores Islands, about 1,000 miles west of Portugal.

While he boarded the ship, they saw that almost everything was in perfect order, with the crew's clothes neatly packed away. However, they didn't find any people. A disassembled pump with a missing lifeboat indicated that there were not sufficient people. She found her in a seaworthy condition with a lifeboat missing. According to the information, her last entry in the log was dated ten days earlier. Later, she left New York City for Genoa on November 7. It was found that her cargo of alcohol was intact. In addition, the goods of the crew and captain were undisturbed.

Decks: 1, as built, two after rebuild

The ship was made in Spencer's Island, Nova Scotia. In 1861, it was launched under British registration as Amazon. But after seven years, on 1868, she was transferred to American ownership. Later, at that time, she got her new name. After that, she sailed without any reason until her 1872 voyage.

After her recovery, the court's officers considered different foul play like mutiny by Mary Celeste's crew, piracy by the Dei Gratia crew, etc.

The Discovery Of The Mary Celeste Ship:

On November 7, 1872, Captain Benjamin Briggs and the crew left the New York Harbor for Genoa, Italy. During the time, he came with seven chosen crews with his wife and daughter. It fought its way through treacherous seas and winds for fourteen days after leaving the town. The captain entered on November 25. People assumed it was the last entry in the log. However, nothing was amiss during that time.

But as soon as the Dei Gratia found the ship on December 5, no one was there. He saw three and a half feet of water in the bilge while boarding the Ghost ship. Bilge means the lowest ship point sitting under the waterline. Although the cargo was intact, a few barrels were empty. As the Ghost ship was seaworthy, the crew of the Dei Gratia split up. Then, these two ships sailed to Gibraltar.

The Mystery Theories about The Ghost Ship :

The ship was seaworthy, for which the crew abandoned the ship. However, six months of water and food were abroad. Besides, the necessary goods for the crew were stowed away. The captain can only abandon the ship in the direst circumstances, which didn't appear threatening. Therefore, it was still a mystery for more than a century and a half.

According to a few people, the crew took alcohol and mutinies. But we have not got any proof of violence. A few people thought that pirates might have raided the ship. But it was not true as valuable belongings were completely safe.

Arthur Conan Doyle wrote a short story where he mentioned an ex-slave who captured the ship. But his existence was also not available. Sea monsters and waterspouts were under doubt also.

Although there were several theories, no proof matched them. Amongst the theories, the most plausible theory was that the alcohol's vapors had blown the hatch cover off. As a result, the crew got frightened and abandoned the ship. But this hatch cover was tightened with proper security. So no foul play was at the root of the matter. While these two ships came to Gibraltar, the Dei Gratia submitted its salvage claim. After that, the admiralty court suspected foul play. But they could not get any proof after investigating for three months.

However, later the crew received payment. But it was one-sixth of the total $46,000 value of the ship. In addition, the authorities did not get a conviction of their innocent.

What is the real truth About The Infamous Ghost Ship?

It was 1884 when Arthur Conan Doyle wrote J. Habakuk Jephson's Statement, a short story depending on the tale of the ship. People started investigating the ship for publicity from the short story. However, people were unable to find new revelations.

In 2002, documentarian Anne MacGregor started investigating. First, she rebuilt the ship's drift with the help of different modern ways. Besides, she deduced that the captain used the wrong chronometer. According to the reports, the vessel was 120 miles west of its original location. As a result, the captain wanted to sight land three days before. After that, he altered course towards Santa Maria Island in the Azores. Then, he searched for shelter to save him from the relentless weather.

MacGregor understood that as the ship was refitted, dust & debris clogged the pumps. As a result, it removed the water to prevent it from turning into a seaworthy ship's bilge. In addition, the pumps were not working, so there was no way to remove the water. That is why the ship could not make its route into the ship's bilge.

It is one of the reasons why Captain Briggs wanted to keep the ship near any land as much as possible. But the crew didn't support him. Instead, they abandoned the ship to save themselves.

The theory of MacGregor is not acceptable or provable. However, it can give us a summary, at least with the proof of disassembled pump. You will not find other theories. After 130 years of the crew's eerie vanishing, the ship's mystery will be solved. You can read about the creepiest ghost ships to know their history. In addition, you can reveal the truth about the Flying Dutchman, the most famous ghost ship.

It will premiere on November 4 on the Smithsonian Channel on high-definition DirecTV.

Although the crew and passengers were missing, they hadn't taken food and water. Captain Morehouse said that the crew of Dei Gratia got the ship in stable condition.

The missing of 10 people remains a mystery.