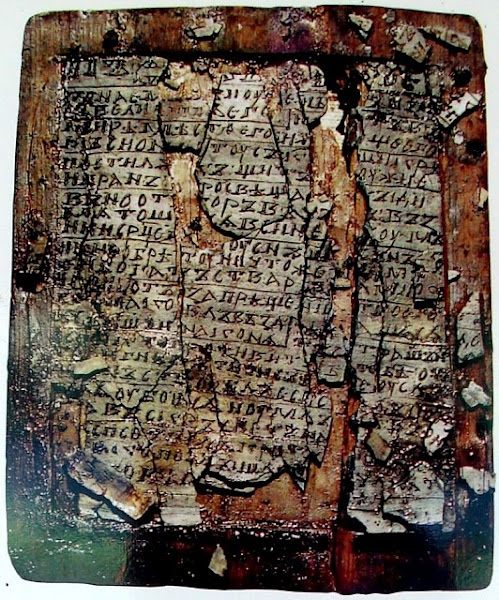 The Novgorod Codex is an old book of Russia, dated between 988 and 1030 CE. Новгородский кодекс is the term used in the Russian language.

It was unearthed on July 13, 2000, in Novgorod. This book is a palimpsest that consists of 3 bound wooden tablets, and there were found four pages filled with wax. The former owner of the book wrote down many texts during two or three decades.

Jesse Russell & Ronald Cohn edited the book, and the publisher's name was Book on Demand, 2012. The ISBN is 5512751379, 9785512751374. 164 pages are the length of the book. According to stratigraphy & dendrochronology and the text, people used the wax codex first in the quarter of the 11th century according to stratigraphy & dendrochronology and the text. It is assumed that the codex was used in the last few years of the 10th century. Thus, it has proved that the book is older compared to the Ostromir Gospels, which is the old dated East Slavic book.

The Novgorod Archaeological Expedition begun by Artemiy Artsikhovsky has been excavating continuously since 1932. But from the last early 1970s, the main focus of the excavations was on the Troitza (Trinity) area, which belonged to the ancient Ludin part of the city. It covered around 6,000 square meters, i.e., 64,500 square feet.

The excavation displays affluent mansions, and a large communal building housed a court room and a Novgorod city treasury.

The major part of the text that was found was birch bark manuscripts. Hence, the most uncommon was wax tablets. It was July 13, 2000, when prof. Valentin Yanin found three wooden wax tablets in the soil. The dimensions of the tablets were 19 x 15 x 1 cm. These come with a 15 x 11.5 cm indentation filled with wax. Besides, it comes with a third tablet that contains two wax sides. The boards contain round holes at one edge, via which you can insert the wooden pegs. These hold the tablets at a place as a four-page book.

The tablets were found in a stratum 50 cm far and 30 cm under a wooden walkway. These are dated to the year 1036. The strata are expected to get growth at about 1 cm per year. Therefore, the document has been placed around 1015-1020. According to Uppsala University in Sweden, the radiocarbon dating of the wax was between 760 AD - 1030 AD. However, they were 95.4% certain.

There was Christian text available on the tablets, which were earlier than Kievan Rus' in 988. Therefore, these wax tablets are considered to be found between 988 and 1030 AD, a short time of 42 years.

Its wax comes with psalms 75 and 76 and a small part of psalm 67. We know this as a basic text of the Novgorod Codex, and we know the book as the Novgorod Psalter. People can read the text like other documents on parchment, and the text can be tested one time only. The Psalter translation somewhat differ from Salvonic translation. And it is known as Psalterium Sinaiticum.

Its language is very normal Church Slavonic, in the basic text mainly. Yeh entire part of the text was written in a 'monomeric' orthography, which is called одноеровая система письма in Russia. Here, merely ъ is used rather than using two yer letters ь and ъ. People of that period considered the monomeric system a late invention before the invention of codex. However, as the dualyeric system was the real one, its invention proved that the reverse might be the case. Novgorod Codex Preservation and Reading Method:

When it comes to prevention, you can see unique challenges. The reason is that the normal preservation method for wood may destroy the wax layer and vice versa. This process enables to separate each wax layer carefully and preserve every material. This latest wood under the removed wax was scratched by the stylus while cutting through the thin wax. However, the research team took some weeks to understand a few symbols that could be discerned in the scratches.

Russian linguist Andrey Zaliznyak has put a great effort into rebuilding a small part of text preceding the basic text. He was a great foremost expert on the early medieval Novgorod dialect.

The hardship with this task is the fact that the feeble traces of dozens of thousands of letters left by the stylus, often hardly discernible from the natural shading of the soft lime wood. Besides, they have been superimposed on each other, producing an impenetrable labyrinth of lines.

Sometimes, reading one concealed text of a page may take several weeks.

As per Zaliznyak, reading the texts is a hard challenge because no research team has tried something like this previously. The compact surface of these four writing surfaces comes with multiple texts, and experts estimated these as being written over several decades. These stylus traces create lines constantly across the whole surface. The texts were written by a single hand to make the method complex, making handwriting analysis impossible.

According to Zaliznyak, it is 'reconstruction,' not 'reading.' He preferred to approach the issue as 'is a phrase A or a word B possible among everything written in this sector' whenever asking a question to himself, 'what's written on this line.'

As a result, the reconstruction has started letter by letter. It begins from an arbitrary position, like at the top part of a 'page.' As soon as Zaliznyak analyzed scratches and identified a few letters in a given spot, he began detecting symbols at the next position. When he discerned some positions, the letter combinations were mostly discarded. After that, he starts locating subsequent symbols which are necessary to finish the word or a sentence. It will be helpful to identify words written with spaces than words written without space.

After carefully completing the test of every position, Zaliznyak starts making symbol chains that continue to grow in size.

But the search often branches off into false leads, where at a certain symbol; the chains switch off to a different text piece.

Multiple texts from them have been noted down many times, due to the previous copy being erased before a new copy is made.

We don't know whether the copies were created properly after weeks, months, years, etc.

It is very tough to peer-review. There are merely a few portions of Zaliznyak's texts that have been peer-reviewed till now. No research team had the guts to repeat the method over the length of a large text. Zaliznyak worked with Linguist Izabel Vallotton of Geneva on a few reconstruction parts. Besides, sometimes, Zaliznyak detected some chain portion and passed this on to Vallotton. After that, each of them continued to reconstruct the texts independently. Both of them have made identical chains that match the letter.

At last, Zaliznyak has considered a problem unsolvable to detect spelling errors or Russisms in the Church Slavonic.

Sometimes, these assumptions might be wrong. These multiple chances might be original that the author corrects themselves by erasing a mistake.

These are the concealed texts that have been discovered till now.

It is a multitude of psalms that ancient people wrote down several times each.

Starting part of the Apocalypse of John

There are some fragments of unknown texts also that follows—

There are a few other texts also which are as follows:-

Meaning: The world is a city where heretics don't belong from the church.

Meaning: The world is a city where unwise people don't belong from the church.

Meaning: The world is a city where disobedient people don't belong from the church.

Meaning: The world is a city where blameless people don't belong from the church.

Meaning: The world is a city where innocent people don't belong from the church.

Meaning: The world is a city where inflexible people don't belong from the church.

Meaning: The world is a city where people who don't deserve the punishment don't belong from the church.

Meaning: The world is a city where people who don't deserve the exclusion don't belong from the church.

Meaning: The world is a city where pure trust people don't belong to the church.

Meaning: The world is a city where people who should be praised don't belong from the church.

Meaning: The world is a city where people worthy of veneration don't belong from the church.

Meaning: The world is a city where people who don't forsake the true faith in Christ don't belong from the church.

The medieval town of Novgorod, which is located in northwest Russia, is a great archaeological site. Here, waterlogging has conserved plenty of material from the oldest time of occupation near about the 9th or 10th century. Before the 2nd World War, Archaeologists have been working at this place. Therefore, the site has now become a World Heritage Site.

Most construction was made of wood at the place. Whether these are the buildings, the road surfaces, or surviving artifacts, most were wood. You can find plenty of text and text fragments preserved on the site. The texts are written on most pieces of birch bark that people use as paper around the world for nations. These texts include personal letters, legal notices, business records, and schoolwork.

People have discovered wooden writing tablets, along with birch bark letters and plenty of metal styli. In July 2000; when three limewood tablets having wax writing surfaces were uncovered. This one is what we know now as the Novgorod Codex.

The decipherment and translation of the Novgorod Codex are still ongoing, but already it has established hitherto-unknown details of the religious culture and connections of medieval Novgorod.

Deciphering the texts are very much difficult as the letters indented in the wood and the wax are directly superimposed and written in the same handwriting.

The linguist Andrey Zalizniak, suggested that the owner of the codex was a monk named Isaakiy, based on first-person references in the texts.

Andrey N. Sobolev has published The Novgorod Psalter of the XI century, and its antigraph in 2003 and the title contains 113-142 pages. Besides, Andrey A. Zaliznyak wrote The oldest Cyryllic alphabet of 3-31 title pages in 2003. In 2001, Andrey A. Zaliznyak and Valentin L. Janin have published The Novgorod Codex of the first quarter of the XI century. It is a very old book of the Rus' containing 3-25 title pages.