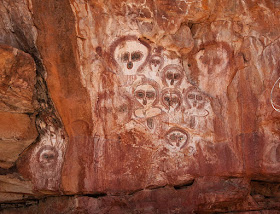 The spiritual art work of Mowanjum people some four thousand years is called Wandjina. They have found exclusively in Kimberley region of Australia. The people still believe Wandjina paintings posses power and they still treat them with great respect.

According to aboriginal mythology, Wandjina (sometimes named as Wondjina) is god of cloud rain. They are depicted rock art sites spread though out the Kimberley region of Australia. Each rock art site and paintings have different names.


The Wondjina Paintings were painted predominately using Black, red and yellow on the white background of the rocks. They are of broad-stroke art work. The Sprits depicted in groups and some times in single. The groups of the paintings arranged horizontally or vertically based on the size of the rocks. The paintings depicted the spirits with large upper bodies and heads. They have full body but they lack anatomical detailing.


The Wondjina have larger eyes similar to the eye of storm, nose and without mouse. According to aboriginal, the spirits are more powerful so they do not need a mouth. The Aboriginal believed that Wandjina’s have mouth the rain won’t ease. The headdresses of Wondjina are lines or blocks of colors that depicting the lighting over their heads. To keep the spiritual power within Wondjina Paintings they were repainted annually by the Indigenous people.
The Wondjina is the sacred spirit of the Worrorra, Ngarinyin and Wunumbal tribes of Australia. No one is allowed paint this and the Wondjina image trademarked back in 2015.
Most importantly, Wondjina are radiant and imposing, their dark eyes gazing out from their face spellbind, appearing to rise out from the rock surface.
Rajkumar R No comments:
Share
‹
›
Home
View web version