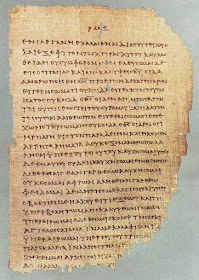 No one is aware of the origin of the papyrus though it was possibly discovered among the ruins of the first Christian church or abbey. The manuscript had been broken up by the dealer, after its discovery which took place in Cairo.

In 1930, Chester Beatty had purchased 10 leaves, while 6 were attained in 1931 and 24 in 1933 by the University of Michigan. In 1935 he purchased 46 leaves more and his achievements now tends to form part of the Chester Beatty Biblical Papyri, eleven manuscripts of scriptural material.


It was in 1930, that the leaves of the document was first identified among the stuffs of a innate relics vendor in Cairo which was purchased without any delay by private collector, Mr. Chester Beatty of London. Thereafter the remaining of the manuscript was acquired from the same dealer by Beatty and the representatives of the University of Michigan.

The earliest extensive New Testament script which existed is said to be a somewhat damaged papyrus of Paul’s epistles around the year 200. It comprised of eighty-six leaves, which measured around 11 by 6.5 inches. Originally it was presumed to comprise of 104 leaves, wherein eighteen leaves now seemed to be missing from the beginning and towards the end.

Existing leaves includes the last eight chapters of Romans, mostly of Hebrews; almost all of 1-2 Corinthians, all of Ephesians, Galatians, Philippians, Colossians together with two chapters of 1 Thessalonians. Due to corrosion, all of the leaves of Papyrus 46 are said to have lost some lines towards the bottom of the leaves.


Initially the document had been examined by prominent researcher Frederic G. Kenyon, in micro graph form. Kenyon made great efforts to discover the susceptibilities of the scribe of Papyrus 46. He also made attempts to determine the number of lines for each page and letters for each line in order to evaluate the contents of the missing pages.

The data gathered from Papyrus 46 would have been utilised by the transcriber for calculating on the quantity of writing material needed. Moreover it would have also been helpful in getting some insight on the fee which the transcriber gathered for each line of the services rendered by them. It was observed from the existing page numbers, that seven leaves were lost from the beginning of Papyrus 46.

This synchronizes impeccably with the length of the lost parts of Roman, which it certainly contained. Since the manuscript had been designed from the mass of papyrus leaves folded from the centre, in the style of a magazine, the outer seven sheets, comprising of the first and last seven leaves of the manuscripts seemed to be lost. Matter from the seven missing leaves towards the end is vague since they has been lost.


According to Kenyon’s calculation, 2 Thessalonians would need two leaves, where only five leaves are left (10 pages), for the remaining canonical Pauline writings. 1 Timothy (considered 8.25 pages, 2 Timothy – 6 pages, Titus – 3.5 pages, Philemon – 1.5 pages all totalling to ten leaves were needed. Kenyon was of the opinion that Papyrus 46 did not contain the pastorals and this prevailed for several decades.

New study however had raised queries regarding the analysis of Kenyon. Initially, Kenyon had not accounted for the fact that the average letter for each page of the transcriber had been increasingly deep in the text. It was observed that there were half as many letters on each page in the last pages than what was in the centre leaves.

This was somewhat owing to the outer leaves being wider than the inner leaves. However there seemed to be more letters towards the outer leaves at the back in comparison to the front outer leaves. This specified that some compression could have taken place at some point of time portraying that transcriber had been conscious of the issue he created for inclusion of the pastorals. He then had made attempts compensating for the same on realising the error done.


Furthermore, the Centre for the Study of New Testament Manuscripts – CSNTM were capable of taking high resolution images of the earlier manuscript. On scrutiny of the fresh images, the CSNTM were of the opinion that the lower quality microfilm of Kenyon was somewhat twisted which led him to misjudge on the writing space the transcriber had utilised in the completion of his work.

It was found that at least 3 of his measurements had been miscalculated by 3mm and another one by 5mm. The flaw on measurement had then been compounded over the remaining manuscript leading him to underestimate on the space the transcriber utilised for completing his work. Daniel B. Wallace, who performed measurement only on few leaves, suggested that further study would be essential.

It has been detected that all through Romans, Hebrews and the concluding chapters of 1 Corinthians, small and thick strokes or dots, generally considered to be that of the reader instead of the transcriber of the manuscript. On examination it was found that the ink seemed much lighter than what was found on the text. They seems to indicate divisions which are likely to verse numbering found in Bible as well in parts of Papyrus 45.


Papyrus 46 could be some evidence of reading in the community held for both the manuscripts. Edgar Ebojo made a case that the `reading signs’ with or without space could be of some help to the readers most probably with regards to liturgical perspective.

Nomina Sacra, in Christian scribal training is said to be the abbreviation of various regular happenings of divine name or titles, particularly in Holy Scriptures in Greek manuscripts. A Nomina Sacra comprises of two or more letters for the new word crossed by an overline.
Rajkumar R No comments:
Share 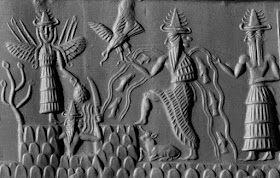 Anunnaki is the resultant of An, which is the Sumerian god of the sky. Anunnaki has been considered to be the descendants of An and his spouse, the earth goddess Ki. According to Samuel Noah Kramer, Ki has been identified with the Sumerian mother goddess Ninhursag asserting that they were initially the identical figure.


The appearance of the Sumerian on the archaeological record stated it to be around 4,500 BCE. The region, Mesopotamia located in the present day Iraq, has been referred as `the `cradle of civilization’. Initially, Sumer had been a city-states which was governed by priest. Each of these priest, controlled a city and temple which is presently known as `ziggurats’. These dedicated to Anunnaki worship, were said to be layered pyramids having flat tops and these communities were considered as servant-slave populations who had to serve Anunnaki, the temple gods.

Skilled Trade Merchants With the passage of time, this priesthood ruler-ship gave rise to the reign of kings. The Sumerians were known to be skilled trade merchants who learned lapis lazuli from Afghanistan. They obtained gold from the Indus Valley and cedar from Lebanon. The history of Sumerian had been established from archaeological and geologic evidences.

It is said that the engraved chronicles were in the form of cuneiform tablets. According to reports, around half a million tablets were excavated. However only a small number of the same could be translated. Great insight has been achieved from these translations of Babylonian records. During the Babylonian era, Sumer had been considered as an `ancient’ city. Anunnaki was worshipped by the Sumerians.

Anunnaki Chthonic Deities of the Underworld 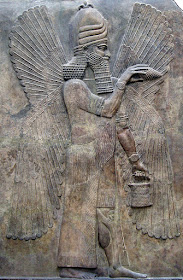 The Anunnaki in Inanna’s Descent into the Netherworld, have been depicted as seven judges sitting before the throne of Ereshkigal in the Underworld. The later text of Akkadian, like the Epic of Gilgamesh, trails this depiction. The Anunnaki, during the Old Babylonian era were said to be the chthonic deities of the Underworld and the gods of heaven were considered as Igigi.

The early Hittites recognise the Anunnaki as the oldest generation of gods who had been defeated and expelled to the Underworld by the younger gods. They have featured in the present pseudo-archaeological works like the books of Erich von Daniken and Zecharia Stichin. According to theory it states that the sky gods considered the human race as slave class.

These theories have given rise to the understanding of `ancient astronaut’ hypothesis speculated that off-world being could been considered as gods to influence human affairs for ages. Many were of the opinion that Anunnaki had been extracting huge amount of gold engaging human labor.

This information has been gathered from the various findings from ancient mining tunnels in South Africa. Besides theses, the relics and links to the Sumerians has also made its contribution to the information.

Tellinger has commented stating that no one is aware as to why they needed the gold or how much of it had been taken. He added further that the Anunnaki had make known the concept of money, finance together with debt to human societies. There is also a possibility that the off-world gods brought about advanced technologies which accounts for refined megastructures like the pyramids or Stonehenge.

Rare artifacts together with the discoveries of tool have make their contribution to these premises. Besides this, the Sumerians have also been known for cultured astronomical as well as mathematical understanding which is probably presumed to be passed on from the Anunnaki. Though we find no trace of the Anunnaki pantheon, it is known that every Sumerian city-state had its individual Annunaki god that had been assigned by a senior Annunaki Marduk.

According to others motivated by Theosophical Society founder Helene Blavatsky’s book – The Secret Doctrine, are of the opinion that Annunaki could be a reptilian race which survives till date. They further believe that they are deeply rooted in human affairs. Blavatsky in her book mentioned about `dragon men’ who had influenced the lost Lemurian civilization.
Rajkumar R No comments:
Share
‹
›
Home
View web version