Gundestrup cauldron: Is It a Celtic Artefact or Indian? 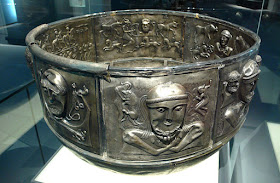 A popular silver bowl located over hundred years back in a turf swamp in Jutland in Denmark is the Gundestrup Cauldron. It was discovered by peat cutters in a peat bog known as Raevemose. At that point of time, the Danish government offered a reward to the discoverers who consequently fought among themselves over its separation.

Apart from the decorated round medallion towards the centre of the interior area, the plate at the base is said to be smooth and not decorated internally and externally. However, the other plates seem to be decorated greatly with repousse work beaten from beneath to move out the silver. Other procedures had been utilised to add more aspect bringing out wide trimming together with some use of decorated pieces of glass for the figures. Overall the weight of the Gundestrup cauldron is just below 9 kilograms.


Its exteriors have been richly decorated with various scenes of war and sacrifice, a goddess flanked by elephants such as Gajalakshmi, deities wrestling beasts and a mediating figure with stag’s antlers. The Gundestrup cauldron dates back to the middle of the 2nd century BC.

Taking the elephants into consideration, the iconography should be Indic while the yogic figure in cross-legged Indian pose appears to be Pasupati (Siva). The Gundestrup cauldron is said to be one of the largest specimens of silver of European Iron Age. Its diameter was 69 cm and a height of 42 cm. When the site was excavated, the Gundestrup cauldron was located in a dismantled state together with various other pieces piled beneath the base in a marshland. 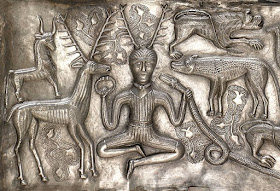 
Though the Gundestrug cauldron was traced in Denmark, it could not have been produced there. Elements of Gaulish and Thracian origin signs have been seen in the workmanship, metallurgy and images. Procedures and basics of the style of the panel are connected with the Thracian silver, and most of the description of the human figure is linked to the Celts.

However several attempts to connect the scene with that to the Celtic mythology seem to be questioned. Another characteristic of the iconography has originated from the Near East. Hospitability probably was the responsibility of the Celtic leaders. Though the cauldron seems to be an important item of prestige metalwork, they are generally smaller and plain.


The Gundestrug cauldron had been traced in parts, and the same had to be reassembled. Sophus Muller determined the traditional order of the plated and was the first to analyse the cauldron. He utilises his reasoning on the positions of the trace solder placed towards the rim of the bowl.

A puncture sign in two cases tends to penetrate the interior and exterior plated supporting in creating the order. In its concluding stage, the plates are placed in a variation of female-male depiction and presuming that the missing plate could be of a female. However, not all the analysts are in agreement with Muller’s comparison.

According to Timothy Taylor, the art historian, he stated that besides the two cases of puncturing, the comparison cannot be determined from the point of view of the solder alignment. He debates that the plates do not seem to be directly adjacent to each other. They tend to be divided by a 2 cm distance. Hence the plate in this order is not to be read with conviction as the true narrative, should one exist.


As per some of the historians, the Gundestrup cauldron had been carved by craftsmen of Indian origin in Thrace. The National Museum of Denmark has raised this question, ‘The Gundestrup cauldron’s motifs draw the observer into an alien universe far from that of the people who deposited in the bog in north Jutland.

Elephants, lions and several unknown gods, represented in a different style, indicate that the cauldron originally came from a distant area to the south or southeast. Exactly where it was made is still open to question. Perhaps it was a gift to a great chieftain or could it have been war booty?’ Taylor mentioned in the Scientific American that `a shared pictorial and technical tradition stretched from India to Thrace where the cauldron was made and then to Denmark.

For instance, yogic rituals are inferred from the poses seen of the antler-bearing man on the cauldron and of an ox-headed figure on a seal impress from the city of Mohenjo-Daro. The other three connections are the ritual baths of goddesses with the elephants, Lakshmi is the Indian goddess, Visnu, wheel gods and Hariti, the goddesses with braided hair and paired birds.


The bowl has several features which seem to have some similarity with the ornamental plate from the Thracian grave at Stara Zagora in Bulgaria. Therefore its theory is of Thracian origin. From the observation of the clothing of the figures, it seems to be Indian, considering the woven herringbone tight costumes together with the cummerbund which both the men as well as the women seem to attire themselves with.

It has been presumed that the Gundestrup cauldron had been the work of several silversmiths. With the use of scanning electron microscopy, it has been identified by Benner Larson that 15 various punches had been utilised on the plates. These were categorised into three various toolsets. No single plate had marks of more than one of these sets which portray that at least three diverse silversmiths had worked on it.
Rajkumar R No comments:
Share 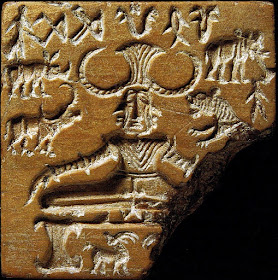 The finding of the ancient Harappa and Mohenjo-Daro sites has provided a different outlook on the ancient history of this town. The well planned urban spaces together with the town plans, are said to be amazing. Observing the relics discovered at the site has provided important perceptions on the culture of the Indus Valley Civilization (IVC). One of great importance is the `Pashupati Seal’. This well-known seal is said to be the carving of a man having horned headdress.

He has been a subject of celebrated conjecture. Many have been speculating on whether he was a man in a horned headdress or a horned god of devotion. Was this idol a predecessor to the Hindu Shiva? Nonetheless, the Pashupati Seal is not considered to be completely unique. Identical icons have been traced to several cultures of the world.


The seal has been engraved on a chip of steatite which is a soft stone, resistant to decay and soft for carving. With the discovery of the significant number of the seals, it has led. Some of the scholar with the opinion that seals cutting had been one of the leading industries of Harappan settlements. The work of art of these seals portrays a representation of the religious character and the kind of culture as well as the social life of the people of that age.

The pictographic inscription seen on the Pashupati seal is of great importance since they give some insight into the language used by the people of that age. It could probably be that seals were utilised as a part of trade mechanisms. Indication of religious belief and practices of the people is also gathered from these seals.


The Pashupati Seal is considered to be one of the ancient depictions of the Hindu god Shiva. Pashupati means `lord of animals, and it is one of the epithets of Shiva or probably Rudra. These are connected with asceticism, yoga and linga and regarded as the lord of animals. The seal had been discovered in 1928-29, Block 1, Southern area of the DK-G vicinity of Mohenjo-Daro.

It had been located at a depth of 3.9 meters beneath the surface. The excavation had been carried out by Ernest J. H. Mackay at Mohenjo-Daro. He had dated the seal to the Intermediate 1 Period presently considered to be around 2350-2000 BCE. According to his report of 1937-38, he had numbered the Pashupati Seal as 420, providing it with its alternate name.


Archaeologist, John Marshall had provided an initial report and analysis of the iconography of the Pashupati Seal. He had served as the Director-General of the Archaeological Survey of India and had headed the excavations of the Indus Valley sites. He perceived the central figure as a male deity with three faces and probably a fourth one facing the back. The figure is seen seated in yogic position on a throne with bangles on both arms along with the headdress. Images of five symbols of the Indus script are seen on both the sides of the headdress.

This is made up of two outward extended curved horns of buffalo style together with two upward jutting points. Towards the centre of the headdress, a sole branch having three pipal leaves is seen. Seven bangles on the left arm and six on the right are seen where the hands have been placed on the knees. The heels are positioned together beneath the groin while the feet are seen projecting away from the edge of the throne. Carvings at the feet of the throne are similar to those of the hoof of a bovine, seen on the bull and the unicorn seals. On the back of the seal, a grooved and perforated boss is seen.


These animals have stirred plenty of legend and art with their strength and beauty. Horns could be connected with power and virility since the finest bulls tend to have the biggest and the most splendid horns. In truth, powdered horns of animals have been prescribed and consumed in some area of Asian societies, illegally.

The Indus Valley unicorn seals may have been examples of the ancient myths with regards to strange and supernatural horned animals. The horned idol on the Pashupati Seal could be interpreted as Bada Dev or Mahadev, the main idol of several tribal societies. It is observed that the meditating yogi is heavily decorated with jewellery and his arms are totally covered with bangles. These were the features which the dokra craft utilised in the tribes of Chhattisgarh.


Several seals have been found from the sites generally made of steatite and some of agate, chert, copper, terracotta and faience. These depicted beautiful images of animals like unicorn bull, tiger, elephant, rhinoceros, bison, buffalo goat and much more. The main intention of the same could be commercial. They were also utilised as amulets worn by the person or probably as modern identity cards. The standard size of the Pashupati Seal was 2 x 2 square inches.
Rajkumar R No comments:
Share
‹
›
Home
View web version