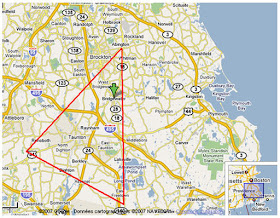 
The Bridgewater Triangle first described by researcher Loren Coleman in 1970s is a location of around 200 square miles which comprises of towns of Abington, Rehoboth and Freetown at the angles of the triangle and Bridgewater, West Bridgewater, North Middleboro, Segreganset, Dighton, North Dighton, Berkley, Myricks, Raynham, East Taunton and Taunton within the triangle.

Right from colonial times, it had been a site of apparent mystic spectacles which ranged from UFO and black helicopter. The findings comprise of severe multipoint facts of justification inclusive of police as well as local news team, to apparitions and orbs, balls of fire together with other haunted occurrences, various Bigfoot discoveries, giant snakes and thunderbirds and as the mutilation of cattle and other livestock.

From Bigfoot and UFO detections to ghosts and strange voices, the space from Abington south to Freetown, west to Seekonk as well as north back to Abington has various sites which is said to possess an energy different from any other area in the state.Towards the central area, one will find the mysterious and the largely untouched Hockomock Swamp, the largest swampland in New England and one which is rich in animal, plant and geologic diversity. The dense surrounding is said to be a difficult place to navigate which has led to believe that certain creatures could be lucking in the swamp unnoticed.


The Wampanoag tribe have called this space Hockomock which means the place where the spirit dwelland the Colonial settlers called it `The Devil’s Swamp.Some of the weird findings reported comprised of flying creatures and ghosts. At 5,000 acres, the swamp is said to be one of the largest of its kind in the whole of north-eastern U.S.

Some areas seem to be very remote and difficult to penetrate and one is left to speculate how some of the strange things reported could continue to elude discovery through the years. Several residents from the local towns have reported strange feeling regarding the swamp and there is a strong local superstition that some evil supernatural or satanic activity seems to be going around there.

Moreover, the Triangle had also been known to house most of the Indian burial grounds. One of the most usual marvels observed and reported in the area is `spooklights’ or sometimes known as ghost lights which are typically seen in marshy or damp areas. The performance of this phenomenon is steady with mysterious lights apparently observed in the Bridgewater Triangle inclusive of those that appear along train track every January.


The first documented UFO discovery in the Bridgewater Triangle occurred on May 10, 1760 at 10 in the morning where a sphere of fire was noticed over New England. As per historical records, the UFO emitted light, adequately bright to cast a shadow in bright sunlight.

The sound made by the object was heard oddly at the middle of the course it took, rather than at the beginning. The light was seen in Bridgewater in Massachusetts and in Roxbury. On Halloween night in 1908, Bridgewater was once again visited, and the incident was well documented in the local newspaper. Two undertakers had been driving a carriage from West Bridgewater to the centre of Bridgewater when the incident took place soon after 3 am.

They described the object as an unusually strong lantern around two and a half feet in diameter lighting a large object like a balloon bag and watched it for around forty minutes. Though a newspaper reported that all balloons which make ascension, in this State were accounted for, some who had not seen the object believed that UFO had been a hot-air balloon.

To counter this, one of the undertakers had mentioned that a hot-air balloon could not move in a circle or perpendicular as this did. He mentioned that the object moved up and down at the will of an individual.
Rajkumar R
Share