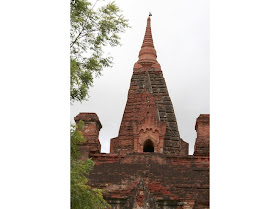 But the Burmese warlord was no magnanimous conqueror, despite his conversion. When he turned his victorious troops north again for the 650 Km journey back to Pagan, he took with him the labour force that was to rebuild his capital; an army of slaves. Atleast thirty thousand Mon villagers made the long march north. So did hundreds of monks and thousands of skilled artisans including stonemasons, potters and architects. As soon as he reached home, Anawrahta put his slaves to work in the rice fields of Kyaukse and on the building sites of Pagan. As the months of captivity stretched into years, a subtle alchemy took place between the two peoples. The slaves began to civilize their masters. The first inscription in Burmese written in Mon characters because the northerners had no alphabet of their won appeared at Pagan in 1058, a year after the fall of Thaton. Later inscriptions on Pagan’s temples, detailing the costs of construction and the builders of each shrine make it clear that some of the skilled Mon workers were being treated as free artisans. Many of the workers chose to stay on in the north after they were freed. Buddhist monks who had been forcibly imported seem to have chosen likewise- attracted, possibly, by the king’s support of their faith, and by the challenge of missionary work among the largely spirit worshipping Burmese. 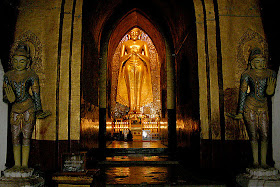 Shin Arahan, now a close adviser to Anawrahat, travelled the growing kingdom, preaching, converting, planning new temples and setting up Buddhist monasteries and schools. Anawrahta remainded., for the most part at Pagan, directing the construction of its pagodas, monasteries, and the cone topped shrines know as Stupas. As the city grew in prestige, Buddhists scholars, and artisans flocked to it from India, Thailand, and even Sri Lanka. Merchants followed the flow of people up the wide Irrawaddy river, bringing trade and wealth. By 1073 Pagan was so respected as a Buddhist centre that when Sri Lankan king Vijaya Bahu, chose to revive Buddhism he turned to Anawrahta for help. The Burmese king sent monks and in return, Vijaya Bahu gave him a replica of Sri Lanka’s holiest relic: a tooth reputed to be one of the Buddha’s own. After Anawrahta died in 1077, the building continued under his son, Sawlu and Sawlu’s successor Kyanzittha. Kyanittha was responsible for what is still one the wonders of Pagans: The Ananda Temple, a gian building detailed with gold and silver, decorated with statues and glazed terracotta plaques depicting Buddhist parabales. 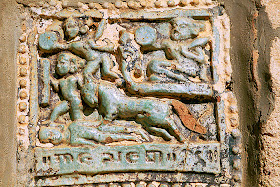 As Buddhism took hold in the Pagan Empire, it became the dream of thousands of Burmese to build their own shrine. Women took part in these religious and building activities on the same terms as men. Tribal customs and Buddhist doctrine guaranteed their freedom and equality. A while mantle of painted bricks Stupas and temples spread across the country. But behind the devotion to Buddhism, echoes of barbarism remained in the Burmese court, at least. Anawrahata himself had worshiped not only at the shrine of Buddha’s tooth, but also at other altars built to appease the nats. At the start of work on the Ananda, Kyanzittha had a child buried alive to provide the building with a guardian spirit; this was not a Buddhist custom. He dedicated the temple in 1090 by ceremonially executing the architect who had designed it, so that the creator could not repeat or better the design elsewhere. 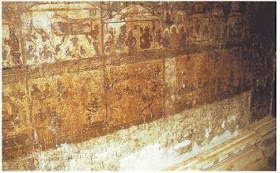 In the 13the century, the Pagan Empire ended as it had begun – in violence. Three main factors had pushed it to the brink of collapse. First, incessant border wars against outlaying tribes drained the villages of men. Secondly, the obsession with building, and the granting of the best lands to monasteries and temples for their upkeep, deprived peasants of the space to grow crops. Thirdly, the land itself was becoming poorer with every building that went up. The bricks were made of fired clay, and over the years almost every tree in the region was felled to feed the kilns. The result was catastrophic erosion. In the face of growing poverty and anarchy, traders began moving away from Pagan, taking with them the revenue that had been a vital source of the city’s wealth. The end came during the reign of Narathaihapate. Ambassadors from the Mongol Chinese Empire of Kublai Khan visited Pagan to demand tribute. Narathihapate, outraged at being given orders, had the envoys executed. 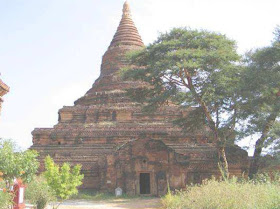 It was an absurd gesture. The death and the subsequent Burmese raid on a frontier state that had submitted to China provoked a punitive expedition by the Mongols. The Burmese chronicles proudly record that, in 1277, Narathihapate held back the invaders at Ngasaunggyan, about 560 Km north east of Pagan. But they also admit that the Burmese war elephants eventually retreated before mounted Mongol archers. Six years later, in 1283, the Mongol hordes attacked in earnest and defeated the Burmese at Kaungsin, about 440Km north east of the capital. The king and his court fled down the Irrawaddy, abandoning Pagan to the invaders. Kublai Khan’s officers were staggered by Pagan’s magnificence. The Venetian explorer Marco Polo talked to the soldiers when they returned to China. He described the city they had seen.’ It was full of stone towers covered in gold and silver, with bells at the top, so that the wind made them ring,’ he wrote. ‘And truly these towers made one the most beautiful landscapes in the world, for they were finished exquisitely, splendidly and at great expenses. The beauty was not to last, Narathihapate tried to reclaim the throne of Pagan, but in 1287 the Mongols again invaded, and put the city to the torch. Looters stripped the temple of their gold and silver. But the building themselves survived and have been tended by generations of devoted Buddhists ever since.
Rajkumar R 1 comment:
Share 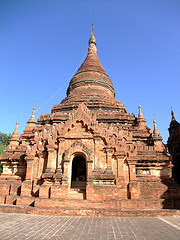 On the plain in the central Myanmar (Burma), Stone shrines mark the site of Pagan. They are dedicated to Buddhism- a creed that abhors violence. Many were built by slaves on the orders of a king who condoned the sacrificial murder of his own wife. Early one morning in the year 1044 AD, villagers and courtiersgather in front of a wooden palace in Myinkaba, northern Myanmar. Their ruler, Sokka-te, still new to the throne has been challenged to a duel by his half brother Anawrahata. Sokka-te, confident of victory, accepts the challenge. Of the younger Anawrahata he says scornfully; ‘his mother’s milk is yet wet upon his lips.’ Each of the brothers, armed with a lance, mounts a horse. They charge, thrusting and stabbing. Sokka-te shrieks and falls, transfixed by his brother’s lance. Anawrahata is carried in triumph to the palace of his father. 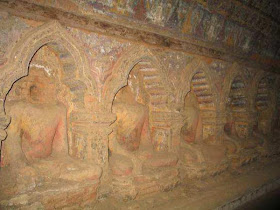 So, according to a Burmese chronicle, began the reign of one of history’s most unusual converts to Buddhism: a ferocious warlord who enslaved a nearby civilization in order to build a city that was devoted to Buddha, the prophet of gentleness. When Anawrahta came to the throne he believed, like his people, in spirits; entities know as Nats who determined human destiny by controlling the land and the forces of nature. Burmese chronicles record that a Nat appeared to Anawrahta in a dream and commanded him to build monasteries and shrines, to dig wells and ponds, and to construct an irrigation system and grow rice for his people, all in penance for the death of his brother.

In obedience to the spirit’s orders, Anawrahata chose a plain bordered by two rivers, at Kyaukse, about 30 Km south of the present day city of Mandalay, and set to work. He collected forced labour from the nearby villages and hired irrigation experts from the Shan hill tribes of eastern Burma. For three years, tens of thousands of peasants toiled unceasingly in the steam bath heat of the plain. They built dams, dug canals, and changed the course of the rivers as Anawrahta ruthlessly pursued his vision. In the course of the projects, thousands died of tropical fevers and exhaustion. 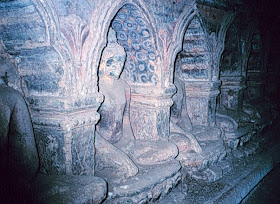 Finally, the mammoth undertaking was ready. As decreed by his people’s grisly custom, Anawrahta would mark the occasion by offering human sacrifices, one for each dam. The victims, it was believed, would then become nats, the guardian spirits. Chronicle record that a wife of Anawrahta, sister of a Shan chief, offered herself as a single substitute sacrifice for all the dams. Her offer was accepted. She was ritually killed- possibly by having her throat cut and her body was burnt on a huge pyre.

The flooded paddy fields at Kyaukse became the economic powerhouse of Anawrahta’s realm, producing food for the people and a torrent of wealth to swell the royal coffers. Gradually more neighboring chieftains came under Anawrahta’s sway, and his territory spread north towards what are now the Indian and Chinese borders, east in to Thailand, and west to the Bay of Bengal. At the same time, he expanded the town he had chosen as his capital: Pagan, on the banks of the Irrawaddy River. The town needed work to turn it into a city. The native Burmese were poor architects and worse artists, but to the south lay a civilization, the Mons, living in a patch work of city states that had been a centre of culture for more than 1000 years. From this centre, in 1056 AD, came a remarkable refugee: a Buddhist mon called Shin Arahan. Shin Arahan was a mon who believed fervently in the traditional creed of his people: an ascetic variety of Buddhism called Theravada. His faith, however, had come under pressure in his homeland, both from other Buddhist sects and from the Hindu influence of India. The final insult came when the Monk leaders agreed to a number of compromises with Hindu Beliefs. Shin Arahan, outraged by the changes, deserted his home and began his journey to Pagan.

Anawrahta was impressed by the power and passion of the monk. Within a year, the king was publicly converted to Buddhism, and ad agreed to invade the Mon territories to help to re establish the supremacy of Theravada Buddhism. With Shin Arahan at his side, the king marched south on one of the most important Mon cities- Thaton, on the coast of the Gulf of Martaban, east of Myanmar’s present day capital, Rangoon. When Thaton fell in 1057 after a three month siege, the other Mon city states submitted without a flight.
Rajkumar R 3 comments:
Share
‹
›
Home
View web version