Art of Realism and Vulgarity

What is mean by Realism? When an artist paints a model, he paints what she is and as she is this called Realism. Most of the medieval artist done the same including the Great Dutch artists. If the model is perfect with enchanting beauty then there is nothing to say the painting is loutish beefiness. This kind of differentiation can be well explained by comparing the two paintings “The Leda” painted by various famous painters of those days. In this comparison the former is improper since she is neither naked full nor she is altogether clothed. For the subject of painting, being partially clothed is obsolete.

Let us see another two examples “Leda and the Swan” was also sculptured by Michelangelo as Jupiter having sexual intercourse with Leda as swan is an example for realism. Compare this with the painting of a nude girl frightened by crackle of a flying bird a bathing veiled corner. Though the later exemplified her innocence and she is alone beautifully by the painter it is not in the category of realism. Hence another term Vulgarity arises.

The word Vulgarity was derived from the Latin word Vulgaris means not refine or in bad taste. Most of us think both the words vulgar and obscene means the same thing. A representation of sexual intercourse is not obscene why because it is proper and moral act of a human being. Whereas, it is generally accepted that it is in bad taste to represent it in art. A picture representing coition may be vulgar but not obscene. All the vulgar pictures are necessarily be evil and but they are more or less like that only. The vulgar pictures are often arousing sexual feelings and stimulate the mind and the physique. In other words Obscenity represents the depravity in character or in the habit. It differentiates what is decency and what is indecency. Hence we can conclude Obscenity is harmful. When a female and the male is painted or sculptured together as nude the idealization is difficult but don’t forget to accept it is often done humbly and properly. We can give lots of examples both in ancient and the modern art Cupid and Psyche, Love by Evelyn B. Longman.
Rajkumar R No comments:
Share

According to Homer’s Iliad Alexandra (Cassandra) was the offspring of King Priam the ruler of Troy. Cassandra was an attractive young girl who was blessed with the bequest of prophecy by the Apollo. Apollo was smitten on her but Cassandra avoided him so Apollo got angry and soiled his blessings to Cassandra according to that she was destined to tell the reality but never believed. According to Robert Graves Cassandra means “The girl who entangles men”. This was an irony since, even though she was a beauty queen her fore told prophesies about their death kept the men far from her. Cassandra was always been misunderstood and treated as a mad woman and a raving lunatic. Cassandra was an immense beautiful brilliant woman but sadly cursed by the gods because she refused to be a puppet in their hands. Hence she is not a mad woman but she is a heartrending lady. 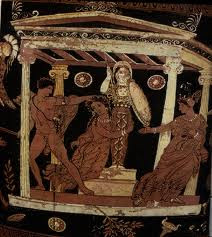 In Greek mythology more stories of gods lusting and falling in love with the young beautiful girls are there. Since Cassandra is a beautiful young woman she is no exception. There are two versions how Cassandra got the gift of Prophecy from Apollo the most beautiful young god. One day Cassandra was sleeping in the temple of Apollo and her beauty aroused Apollo, he promised her to teach the art of prophecy in turn he expected the sexual favor from her. She agreed to the bargain and learnt the prophecy and later she denied him to keep up the promise. Her activity outraged Apollo and he cursed her according to that curse though she would always speak the truth no one would ever believe her words. One of her most famous prophecies is her prediction of the Greek siege behind the Trojan horse. She foretold their fate but nobody believed her prophecy. Hence the great mass destruction of Troy began and the bedlam infected Trojan and the Trojan girls were at the mercy of the bloody Greeks and outburst the uncontrolled violence on the Troy. The Greek men were pacified only after the sexual aggression and harassment on the Troy women. Helen supplicated Menalaus by showing her bare breast and Cassandra was raped by Ajax.

Vergil gives an elaborate account about the rape of Cassandra. Cassandra escaped to the temple of Athena and she was followed by Ajax. Since Cassandra hold the wooden image of the goddess tightly he could not dragged her away from the statue and so he had taken both of them. Most of the narratives of this story differ here. Very interesting difference is whether Cassandra was actually raped by Ajax or not. Another version of the story elaborates the Athena’s anger at the sacrilege of the temple. Little Ajax grabbed Cassandra who is the head priest of the Goddess Athena and pulled her away by the hair and sanity of the temple. The Alter; where sacrifices to be made are a sacred place. There the pretty girl was humiliated and raped (According to Herodotus 2.64 Greeks were very strictly prohibited from having intercourse in a sanctuary). What happened after the rape (supposed) of Cassandra is enthralling. Agamemnon claimed to Odysseus, Cassandra as a reward for him but Odysseus told him about the rape which was vehemently denied and opposed by Ajax and Ajax escaped and hide himself in the temple of Athena. He finally apologized for displacing Athena’s image from the temple he worked there for his offence. In total Cassandra was the reason of the misery of Greeks in a way here prophetic curse avenged her city came true. If Cassandra had not been humiliated or raped at the altar of the temple of Athena there would have been no odyssey. The people who analyzed the typical paintings of Cassandra and Ajax clearly pointed out no sexual intercourse were suggested in the paintings. Let us analyze the pottery “The Fall of Troy “by Kleophrades in 480.

Cassandra is depicted as nude and a shawl is tied around her shoulders. Her thighs were extended and one of her legs is clamped on the ground and she is knelt the other leg. One of her hand is holding the statue of Athena tightly and the other hand is stretched toward Ajax. Ajax holds her hair tightly with one hand and spread out his sword with the other hand. Ajax’s sword is projected horizontally towards her in a phallic shape. And Cassandra is in an erotic position with her legs wide open and breasts were bare and bulged by the knot of her shawl. Her hand is stretched as signaling Ajax to approach while her palm is facing up and arm is outstretched, this gesture could not be ascertain her acceptance toward Ajax or her fear. There is no actual sign of going to be raped is in this painting and The warrior Ajax looks that he is going to capture here but there is no hint of rape in his body line. She is exceedingly in a submissive sexual position and he is in a dominant position. Cassandra’s life was a tragic one from her initial encounter with Apollo to the last untimely death of her in the hands of Clytemnestra.
Rajkumar R 7 comments:
Share 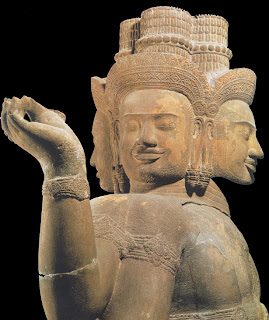 Probably India is one of the leading country has the worship of the nature and its power by symbolizing the genital organs of male and female. Tantras, the scared writings of Saktas are (somewhat later than Puranas) are the worshippers of the wives of the Trimurthi, hence they are the real worshippers of the female powers of the nature. This female worship extends to Shiva Sakthi otherwise called as Parvathi, Kali devi, Dhurga, Bhavani and more. This kind of female worship can be found in Puranas and is much described in Tantras.

Tandras have most mystic and magic rituals, it largely consisting vulgar and dissolute practicing methods. The oldest Indian myths say that the sky and the earth are the parents of all the other gods which is similar to same folklore of the Greek Bible by Homer and Hesiod. Prajavathi is another god sometimes equally ranked with the Trimurthi and is believed that he is the creator of all other gods and of the life on earth. Hence Prajavathi is identified as the God of Heaven. In ancient days the Phallus was not adored and promiscuously displayed as of today. The women were not allowed to view the genital part of a male of that period. According to the ancient Vedic stories Urvasi was not allowed to see her husband Pururavas as nude. Similar story could be seen in Amor and Psyche in Greek work. 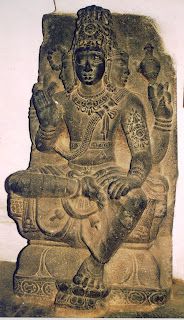 In ancient days, the eternal feminine that is the attributes of conceiving and producing and of nourishing is mentioned as Goethe. Moses told “The Almighty shall bless thee with blessings ……. of the breasts and of the womb" (Gen. xlix, 25). In Psalm “Thy wife shall be as a fruitful vine by the sides of thine house; thy children like olive plants round about the table" (Ps.cxxviii, 3). Similarly the sterility was considered as a curse on Human beings.
Rajkumar R 6 comments:
Share
‹
›
Home
View web version