Understanding the Dance of Honey Bee 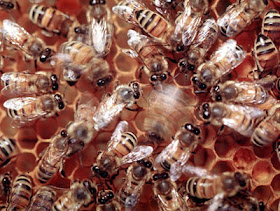 The unusual abilities of many animals present a challenge to the human imagination. But one of the most fascination animal abilities concerns the complex and ritualized dance that honey bee executes to inform other honey bees about where to find food.
In 1913, the Austrian zoologist Karl Von Frisch published a paper in which he explained how honey bees communicate- through dancing. In the process, they convey information to other honey bees about where they can find food. When a successful gatherer enters the hive, she performs a so called waggle dance to provide the other workers with detailed information on where they can find nectar.
Now the language of the bees has been more or less decoded. Scientists are hoping to find out if this is instinctive behavior or whether it can be called intelligence. Are the animals able to detect incorrect messages, for instance? 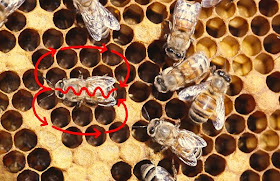 To find this out, researchers trained a group of marked bees to fly to a boat in the middle of a lake, where they were offered some nectar. Under normal circumstances, nectar is never found in the middle of a lake. If bees could think, the information that there was food must be considered incorrect. Therefore, scientists looked very closely at how the animals interpreted the dance in this case. Would they ignore the implausible message or may be even punish the liars?
The experiment led to a surprising result: none of the workers tried collecting nectar when the source was located in the middle of the lake. If the boat with food was drawn closer to shore, more and more gatherers “believed” the dancing bee and went on their way.
Many animals are specialists, and demonstrate considerable skill in their particular area of life. There are many indications that animals allocate their skills to separate memory compartments, which they cannot consciously access. So, while some animals can solve complicated problems, they probably are not aware of what they are doing.
Rajkumar R 1 comment:
Share
‹
›
Home
View web version