Mistery behind Secrets of the Cave painters Part .I 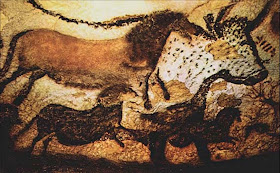 The works of pre historic cave painters provide a window into a vanished world, a time when bison and mammoths roamed the plains of Europe. The discovery of spectacular underground art galleries has stunned the world. First there was Lascaux, with its 17,000­-year-old cave paintings. Then came the finds at Cosquer, estimated to be about 28,000 year old. But the sensational discovery of the Chauvet cave in southern France in 1994 has shed new light on the very beginnings of human artistic genius.

The three cave explorers could hardly believe their eyes: after making their way down a long, narrow path, they entered an enormous gallery some dozens of meters underground. On one wall they saw three lines in ochre and a small red mammoth. With care Jean-Marie Chauvet, Eliette Brunel-Deschamps and Christian Hillaire walked to the end of the chamber. There, they found themselves surrounded by bison, rhinoceros, mammoths, horses, bears, wild cats and deer, all of which seemed to run across the walls of the cave.

The discovery of this staggering Stone Age art gallery took place in December 1994 in southeastern France, more precisely in the valley of the Ardeche, a tributary of Rhone River. The Chauvet cave, named after Jean Marie Chauvet, constitutes one of the most extraordinary archaeological finds of modern times. This is partly due to the works of art it contains, but the cave has also opened completely new perspectives for the study of the beginnings of art. These remarkable finds have led to new discussions of old questions: who were the first artists when and why did they start painting?