The search for Intelligent life in the Outerspace 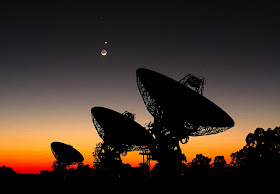 Ever since man began to search into the deep outer space in search of Intelligent life in the universe. For a quite long time our scientists and astronomers are in search of extra terrestrial intelligence. This search was started from early sixties and still continuing. In 1960 the leading scientists by that time, Philip Morrison and Gluseppe Cocconi wrote an article in the most famous British Journal "Nature" about the SETI.

In that article they had mention that we should listen to certain radio frequencies to intercept messages that might be arrived from outer space livings and they concluded that the extra terrestrials must be exist some where in the universe and we will be able to see them and communicate to them one day in future. But no proof arrived.

By the same time two stares namely TAU CETI and EPSILON ERIDANI were pointed out by Frank drake a astronomer in Virginia. They were about 12light years away from the earth.Following the American scientists the Russian scientists tried their part and on 12th April 1965 they received a strong radio signals with high intensity but later they found that they were emanated from the quasars in the distance galaxies.

From sixties to end nineties there were about fifty to sixty listening programmes were conducted by the scientists and astronomers but all ere futile.The frustrated scientists and NASA abandoned the programmes because of the financial hurdles.

After the Apollo 11 mission was successful the NASA again started the projects with the new name MEGA-SETI and they have announced that they had received 164 signals from the outer space. But most of the scientists argued that there could not be extra terrestrial and few argued that we are only primitive to notice the non earthy intelligences.

Many scientists and biologists are unfavour to the extra terrestrial livings because they have so many doubts, firstly they don't believe that life is a common thing. secondly they argued that life in our planet is an accidental happening in the past and so that cannot be occur in the outer space. Last but not the least they argued that humans are an idea ltype that can not be copied.
Most of the stars are of so many light years away from us so the signals will take a long time to reach us and hence the debate will continue till our life time 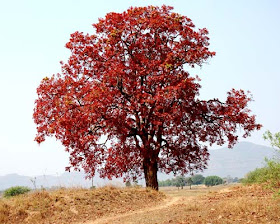 Lac is a resinous substance secreted by a crimson-red, scaly tiny insect called the ‘Laccifer Lacca’. This insect about 0.5 mm long lives and thrives on the shoots of Lac trees and Ber trees.The other name of lac tree is Kusum. Lac is also obtained from Palas and the Ber trees also. The Lac obtained from the Lac tree is considered to be the best. There are four croups of lac named after the months in which the collection of each crop begins.

Lac-popularly know as shellac- has been known to man from very early times. Until the aniline dyes were introduced to markets, man used to get crimson-red dye from crude lac, which was utilized for coloring wool, silk and leather. Besides, it was used by women as Allta- a red colored liquid- to decorate their hands and feet.

The earths speed of rotation was slow down but the rate at which it takes place is very very small and it can not be accurately measured in a small interval of time. In 100 years or more a day or night will be two milliseconds longer. Now our earth takes 24hours to take one complete rotation on its own axis but about 400 million years before it was about 400days long.


Here we gave to remember again the moon is revolving around the earth more slowly and moves away from the earth few centimeters per year. The interaction of moon and earth are the result of the above interrelated phenomena.

we know gravitational pull of the moon and sun cause tides. Apart from these two the centrifugal force of the earth is also a reason for it. The height of the tides depends upon the shape of the coast, depth of the ocean and the shape of the Ocean bed.

The movement of water masses and tides makes some friction on the earth crest which absorbs some energy of the earth which works like a brake and slow down the earth's rotation.

As some time in future our planet will slowed its rotation and it will lose its own satellite moon. Further, after 4 thousand million years the earth will stop its rotation on its own axis which will result in dividing into two halves extreme hot and extreme cold region.
Rajkumar R No comments:
Share

Animals may not talk but they can communicate, they constantly pass on wealth of information both of their fellow members as well as to others.  They can let others to know where they are, alert them if food is available or attract their mate even they can warn the others about the presence of predators. Hence a good communication is essential for every animal to survive.

Some animals like monkeys, bears communicate by touch.  It is used to comfort or maintain bond or prove leadership with in their group.  Sea Otters often rub their faces together to maintain social bond and to scent mark.

By secreting chemical called pheromones in their urine or scent glands, animals can recognize other member of their species, mark territory, find prey or locate mates.

Vibration is yet another method of communication. An elephant not only uses its ears but also uses its feet too.  Elephant’s feet’s are so sensitive that they can detect the low rumblings on the ground created by others elephants some thirty kilometers away. They can detect the distance rumblings of water through their feet and will move towards that direction.

The loudest sound of any land animals is made by the Howler monkey.  It howls to announce its territory and it can be heared up to sixteen kilometers away.

Chimpanzees are most intelligent as human.  They talk to each other through huge range of vocal sound, hand gestures body and facial expressions

THE SHIFTING OF MAGNETIC FIELD OF EARTH

THE SHIFTING OF MAGNETIC FIELD EARTH

The magnetic effect is caused by the electric current produced by the moving molten matter in the earth’s core.  This is like a dynamo hence the scientists call this theory as Dynamo theory.

Since the changes occurred a long ago it is very tough to know the shifts in the earth’s magnetic field, but it is unfolded by the rocks that makes up the earth’s crust.  When the rocks were formed the prevailing directions of the magnetic fields are frozen inside them. They are magnetized for a long time.

When the igneous rocks formed by the volcanic eruptions, the magnetic materials   present in the molten magma behaved as a magnetic compass needles and they deposited according to the earth’s magnetic field.  For finding this residual magnetism the scientists uses magnetometers and maps the fluctuations in the magnetic field.

In 1960 the French scientist Bernard Brunches determined the present magnetic epoch was happened 780000 years ago and hence it was named after his name.  What he did is, He discovered a series of lava flows with reversal polarity.  After finding them he record the ages of the events happened, by judging the age of the rocks series and makes it possible to date with greater certainty.  This is the only way of dating the rock series.

This procedure has revealed so many hidden secrets.  The rock series of normal and reverse polarity makes a zebra striped symmetry.  This shows the Ocean floor is spreading which is a proof to the Continental drift theory. When the shifting of magnetic field happens, the magnetic poles prefer certain routes such as north south route through America.

Is the Moon the Earths own sibling?!

Is the Moon  the Earths own sibling?!

No other planet in the solar system possesses such a large satellite like moon. The first person to develop a theory about the moon was the scientist George Darwin son of the most famous Charles Darwin. He hold the view that the moon and the earth had once been very closer together than now.  He thought that they had been hold together as a single planet revolving at a high speed around its own axis with a time taking less than two hours per rotation.

By that time the earth was molten and with high temperature.  As the speed of rotation was high the earth bulged at the equator.  The centrifugal force gradually caused a drop of terrestrial matter to detach itself and fly out into the space.  This piece of the earth becomes moon, which continues to revolve around the earth as the satellite.

As a proof for his theory, Darwin shows the Pacific ocean which is shaped like a bowl. What he says  is Pacific ocean is a scar left behind when the moon detached away. For most of the years the Astronomers  though that Darwin's theory was more or less correct, but however later realise that the separation of moon from the earth could not have taken place in the way he described.


In 1960, a new hypothesis  Accreation theory was  framed according to this, when the solar system was young numerous planetary embryos, disintegrated near the earth.  The pull of the earth caused the embryo to form a ring around the earth.  Since the particles attracted one another and they began to cluster together finally forming the moon.


None of these theories was satisfactory  to the scientists. The chemical composition of the moons surface differ from the earths crust. On the moons surface there is no alkali metal such as sodium, potassium etc but heat resistant oxides of aluminium and calcium are abundant which proved Darwin theory was wrong and the rock analysis further revealed that moon contains only 10 percent of Iron compared to th30percent of Iron content  of the earth.  Hence this proved  capture theory and growth  theory are wrong.


The origin of moon still present mystery we know that our planet and moon are of the same age. Further we know that our own satellite functions as a climatic regulator for our earth.
Rajkumar R No comments:
Share

GREEN HOUSE EFFECT A BOON OR A CURSE?! 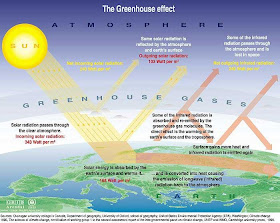 GREEN HOUSE EFFECT A BOON OR A CURSE?!


In the recent past the green house effect has received a greater attention. In recent years most people are not sure what exactly global warming means and they don't know whether it is harmful or useful?

With out the green house effect our earth may be frozen and the earth temperature may fall down to -18 C to -20C. Do you know the average temperature of earth is 15C. The earth atmosphere acts as a permanent trap. In the atmosphere there are many numbers of gases, Primarily Nitrogen and Oxygen, with traces of several other gases and water vapor in varying proportion. While Carbon dioxide, Methane, Nitrous oxide, Ozone, the so called green house gases are of 0.01 percent only in dry air.

The amount of green house effect gases varies due to natural causes such as volcanic activity but recently they have increased to a greater extent which is alarming now.

The root cause of this problem is clearance of tropical forest, rapid industrialization, burning of more petroleum fuels, natural gas, coal and other fossil fuels.